On behalf of the Highgate Society David Richmond has now submitted planning applications to Haringey and Islington Councils for approval of his design. Details of the applications can be seen by clicking here (Haringey) and  here (Islington). The consultation periods on these applications have now closed. No dates have been set for the decisions.

The Highgate Society fully supports measures to prevent suicides from the Archway Bridge but believes the design proposed by TfL and approved by Haringey and Islington to be unsympathetic to the Grade II listed structure. Architect David Richmond, chair of the Highgate Society planning group, has prepared an alternative less intrusive scheme. 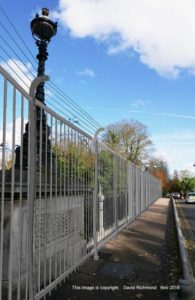 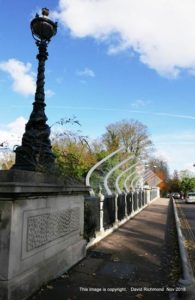 Pictured on the left is the TfL scheme. At right is our proposal, prepared by David Richmond. We think this will be equally effective if not more so at preventing suicides, would be cheaper and quicker to install and could use some of the same stainless steel that may already have been bought for the fence.  This type of suicide barrier has been used extensively throughout the world on suicide bridges with almost 100% success.  The see-through stainless steel mesh is made in Switzerland and almost disappears from view at a distance.  The precise shape of the support arms will require refinement but the principle is shown.  The fence is the same height as that currently proposed but it is clamped to the outside of the existing bridge rather than the inside.  The existing spikes and mesh panels to prevent climbing can be removed from the bridge so that it can be appreciated when on the bridge as originally intended. When seen from the Archway Road the mesh will virtually disappear and the lamp standards and balustrading will be seen in silhouette. The central panel will have a collar in the mesh floating around the central lamp standard so the mesh will be continuous, thus ensuring that the central pier cannot be used to climb over.

The biggest failing in suicide prevention is caused by not closing off the bridge ends so that they can be skirted around.  On the Archway Bridge this has always been a weakness. We believe the best way to deal with this is to continue a very fine mesh down the outside of the balustrade to remove any footholds and fingerholds for the first panel at each end.  This has been done with Perspex panels on the Grafton Bridge in Auckland, New Zealand, see photo below, making it quite impossible to climb along the outside of the balustrade.  Anyone falling from this last panel will land in the sloping soft landscaped area. These barriers were installed in 2003 “and in the subsequent six years there was not a single death by suicide at the site”, quote taken from article written in 2009.  The perspex is prone to graffiti, hence the suggestion to use a fine stainless steel mesh. It can all be removed without damage in future which should keep Historic England happy. 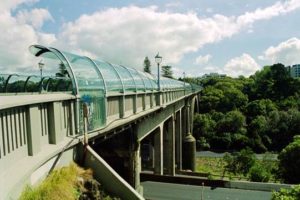 An Evening with
Gloria Davenport

Highgate Society @highgatesociety
This talk is coming up next Wednesday 8/2/23 https://t.co/EFpdqcIHR4
replyretweetfavorite

Highgate Society @highgatesociety
Our voices together can make a difference: sign the petition and join us in protecting Shepherd’s Cottage!… https://t.co/sc15U72gqG
replyretweetfavorite

Highgate Society @highgatesociety
Saturday saw the second and last collections of warm clothes for Ukraine . Thanks to our able volunteers, everythin… https://t.co/O7PMX9VYFZ
replyretweetfavorite

Highgate Society @highgatesociety
Concert coming up tomorrow! It's not too late to book your ticket(s)! https://t.co/MLX7EqV1Xs
replyretweetfavorite